The grounds had become completely overgrown, with sycamore trees having free reign over areas that were certainly not intended for trees. Yew hedges had turned into into 40 ft yew trees and so everything was battling for light. Luckily we cut all the trees down that would cause critical structural damage and we are opening up all the previous walkways.

When we arrived, the Brewhouse was barely visible, it was on the brink of falling down and ivy was all that was holding it together. We completely restored the structure of the Brewhouse and used original westmorland slates to re-roof it as the roof was breaking apart. The shutters and vents make the Brewhouse a very unique and beautiful building and so it is worthy of its Grade 1 listed status. It used to Brew beer for the estate and house workers and we hope to implement our new plans for it very soon.

All the timber work that remained of this porch was completely rotten and completely unsafe for reinstatement. This meant us replacing with like for like materials, which included Pitch Pine timber beams, now extremely hard to source. The roof is now watertight, something it has not been for over 30 years.

After keeping a close eye on the Stable block over the years, we came to the conclusion that this was the most at risk area on the site, and if left a few more months, would probably have collapsed. When we first started uncertainty was a common thought, was the roof about to totally collapse? - making the walls unstable, the dormer windows balancing on rotten rafters and making the job a whole lot harder... and more dangerous.

This is the sight that greeted us when preparing to restore the Stables, the weak

windows, most rafters were completely rotten and had no structural strength at

all; being full of woodworm, dry rot and wet rot so this was no surprise. The first

priority was preserving the dormer windows which, if broken, would cost a large

Scottish flare which Burn established here . The cobbled yard was cleared of

large sycamore trees and 50 years of dirt build up, and then a look at the

roof was needed. The photos of the roof do no justice to the amount of work

needed. We re-use all wood that is structurally sound, but the wood here was

just terrible. We re-built the roofs exactly as they were but using wood that

would ensure the Stables stays standing for at least the coming centuries.

that it was completely unsafe and the mortar was reduced to dust. We used the

original bricks, sketched out their positions before the wall was taken down and

then re-built the wall exactly as original.

dormers we painstakingly repaired as much as possible.

Some may think us to be crazy, but buying the Abbey was by far one of the best decisions we have ever made, even though some days we want to sell the place. We renovate the Abbey while living our lives around it, rather than the other way round, and this can become extremely difficult but at the same extremely worthwhile. There are five in our family; Malcolm and Linda and their three sons James,  Alex and Reece. Malcolm is by profession a carpenter/builder, previously in the guild of master craftsmen, but has extensive knowledge of most building techniques through his decades of experience of restoring listed buildings. We are originally from Derbyshire but after seeing the Abbey we knew we had to have it and have now moved on site to restore the Abbey and its outbuildings. We are on-site all the time now while we restore the Abbey. 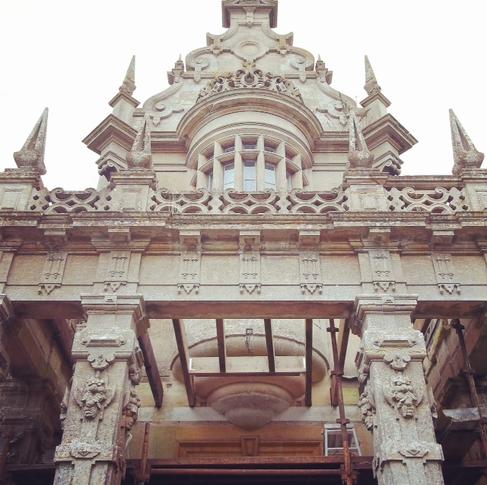